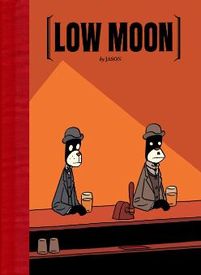 Here it is, the first Jason omnibus.  Five – count em'! – graphic novellas in one hardcover volume.  All new, none before published in the United States (although the work whose title supplies that of the collection, "Low Moon," was serialized in the New York Times).  This works out to less than half the price per work compared to the softcover editions we're all so familiar with (at the copacetic price, they're a mere four dollars and change each).  The lead off tale, "Emily Says Hello," is Jason at his darkest.  You won't wallow in despair for long, however, as it is followed by "Low Moon" which is a quirky – and funny – take on the classic western, as only Jason could do.  Then we have the pivotal, center story, the aptly, if oddly, named, "&." A period piece set during what appears to be the silent film era, this is a piece of gloomy slapstick, an apparent contradiction in terms that only Jason could pull off, and the source of the cover image.  Next up is "Proto Film Noir," which we are not going to say anything about, just to keep you guessing at what a story bearing such a title could possibly be about (here's a tip: don't bother, you'll never guess).  Finally, the book closes with "You Are Here," which may very well be the definitive Jason story, and has to be one of the most pithy stories ever penned on the price exacted by the failure of forgiveness.  Did we mention that all stories are full color?  While everyone doubtless has their own personal favorite Jason book, we feel comfortable stating that from an objective standpoint, this one is clearly the best yet.  So, what are you waiting for?

This item belongs to the categories: Graphic Novel, Gift Catalogue, Collections
You may also enjoy these related titles: