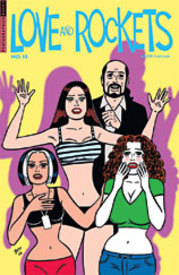 Sometimes it seems like people have forgotten about the Hernandez brothers' seminal series, Love and Rockets, but it hasn't gone away.  Although it concluded its original 50-issue run in 1995, which was followed by a brief intermission during which Jaime and Gilbert each went their own way, working on solo projects (which Gilbert continues to do) Love and Rockets began its second act five years ago with volume two, formatted as a standard comic book and with, as of this writing, the fifteenth issue currently on the stands.  Now, at this point, a quarter century distant from its inception, it has become clear to those readers who have followed the series from the beginning that Gilbert and Jaime have been creating a single work along the lines of Faulkner's Yoknapatawpha county, or Proust's lifelong recollection, in which every moment is nuanced as it unfolds in the reader's mind by its connection to all the others that have preceded and -- at this point in our horizon of expectations -- all those that are still to follow.  What we're dealing with here, however, is comics, so this nuancing takes on a uniquely visual component absent in purely literary works.  The Hernandez brothers have deftly grafted a meta-narrative of symbols and signs onto the delineations of their characters . Pick any face and chances are you could almost click on it and scroll through the character's history.

The lead story of the issue on hand, "Day by Day with Hopey: Saturday is Shatterday," features a sequence in which Hopey -- along with her cohort Maggie, the center of the Locas mythology that Jaime Hernandez has been crafting one story at a time over the last three decades -- goes out with some friends to a nightclub to see a performance by Terry, a former band mate of hers.  Hopey assumes that she'll be granted entrance based on her close connection to the artist, yet this turns out not to be the case and she is relegated to the status of desperate fan trying to get the attention of the "star."  Finally, in a definitive adding of insult to injury, her arch rival from high school, the rich-kid brat Julie Wree, glides right through security, clearly "in" with Terry, whom, back when she was Hopey's bandmate shared Hopey's antipathy towards this very same woman, whom Hopey (and, by extension, the readers of her adventures) hasn't laid eyes on for years.

This very complex and dynamic set of relations between a group of intertwined characters that draws on a span of twenty years is told in 16 panels over two pages that can be read in one minute.  An expressive feat of this sort is something that is perhaps only possible in comics, and has only been fully realized in the pages of Love and Rockets.  Casual occasional readers of Love and Rockets who pick up this issue, will not, in all likelihood, be able to fully appreciate what unwinds over the course of these two pages, but for long time readers who have followed the series in real time as it was published over the last twenty four years, who have invested their sense of self in these characters, the pay off is a huge emotional charge that can go so far as to trigger a personal recognition that leads in turn to a heightened of self awareness.

In her lone appearance in a single panel after years of absence, Julie Wree functions as a signifier for the changes wrought by the passage of time precisely because she has been so sparingly employed in the narrative.  The last time she graced the pages of Love and Rockets (a no-prize to the sleuth who nails her last sighting) was long enough ago, both in the lives of the primary characters (i.e. Hopey, in this instance) and -- crucially -- in the lives of the readers as well, that she immediately triggers a cluster of associations from a time long past and now lost.

The rest of the story glows in the light of this defined emotion and leads the reader to the final epiphany in the last panel of the story (it's only six pages long) when Hopey is asked by another girl who couldn't get into the show, "So, what do you do, Hopey?"  The reader is so wired into the story at this point, so connected to all the emotions that -- surely -- are flooding through Hopey's pen and ink frame at this precise instant, frozen for all eternity in an uncannily vivid black and white image, that  it is almost as though the question is being asked simultaneously of the reader, only the reader hears the question as, "Where did the time go?" and its echoes, "What have I done with my life?" and, finally, "Who am I?"

We all know that it is possible to create such beautiful, evocative moments in this form... but to actually sit down, turn the pages and experience it, well, that's another thing entirely.  It is the promise of comics, delivered.

This is the original unedited version of a review written for Comics Comics #1.

This item belongs to the categories: standard pamphlet comic book
This item is part of the series: Love and Rockets
You may also enjoy these related titles: