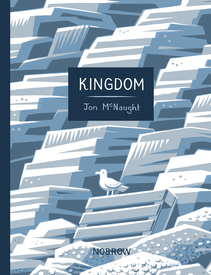 Released in the UK at the close of 2018, the latest work from Jon McNaught is now, at last, available stateside.  A beautifully produced, 128 page, full size hardcover, Kingdom is a real eye opener, and is surely his most accomplished work to date.  As in his previous works, forms and space are here articulated primarily through planes of color, an approach to comics-making derived from McNaught's print-making practice.  Employing a limited, variable, two-tone palette throughout, McNaught largely dispenses with line, depending instead on a careful placement of shapes, edges and color overlaps to construct his images, making for a unique and highly affecting æsthetic.  Readers will find themselves immediately immersed in McNaught's sharply observed comics, enjoying page after page of well balanced, crisp, clean panels, rigorously rendered and meticulously arrayed in metrical layouts so sure handed that they could do double duty as a demonstration of the capacities of the grid in comics storytelling, running the gamut from a single splash panel up to 35 panels to a page.

The decision to place the entirety of the narrative within the frame of one particular holiday excursion creates an explicit union of time and space that is fundamental to the concept of kingdom, and McNaught, helpfully, if somewhat ironically, points readers' thoughts in this direction by lending his title to the name of the coastal holiday park that is the work's primary setting.  That is but the opening salvo in his allusive use of the title, as it is also, clearly, intended – and successfully serves – to represent many layers of meaning, the most significant of which is the kingdom of memory, especially the memory of childhood held in the adult mind, as the work is imbued through and through with an evocation of that naivete and innocence that is the sine qua non of youth.  The adolescent male's bravado, evincing as it does the atavistic drives towards violence and conquest that once served the establishment of kingdom, is pointedly evoked as well, and is additionally linked to the problematic kingdom of technological capitalism that is shown here, as it has been in McNaught's previous works, to be intent on exploiting youth's naivete and thereby colonizing its innocent consciousness, displacing the natural world that is every human's birthright in order to rule in a virtual realm.  In fact, once the mind is focused on the concept of kingdom, it can be seen permeating practically every layer of the work, and then, by extension, the reality it portrays (which is, of course, the point).

While there is an implicit centering of the narrative on the adolescent male character that is, more or less, a stand-in for the author's perspective, a great deal of empathy (manifestly informed by the adult consciousness housing the recollections of adolescence) is shown for the other members of his family, here his mother and younger sister, and, in one scene, a great aunt, each of whom are successfully fleshed out with distinct, independent identities and shown to have their own concerns and unique experiences; their own kingdoms, as it were.

The events depicted are, as they must be, spatially represented.  These representations can, at least in older readers, additionally serve as a means to an end:  the particular combination of images that McNaught has so succinctly rendered, together with their uncanny sequencing, unlocks static temporality and effects time travel in the mind of the reader, who will find themselves leaving the present behind on the reading chair and revisiting their youthful consciousness. These temporal experiences, stored and then reactivated and retrieved, take the recaller of them back into the spaces in which they took place, creating a dance between time and space that McNaught's two-tone approach is ideally suited to capture, and which the narrative itself explicitly alludes to.  One of the special pleasures of this text is how the childhood memories revisited here in the pages of Kingdom take on that particular majesty of the world as seen through a child's eyes, whereby it is once again made new...

Kingdom is a deeply studied work.  McNaught appears to have incorporated insights gleaned from works as diverse as Chris Ware's Acme Novelty Library, Seth's Palookaville, Kevin Huizenga's Ganges, Mariko and Jillian Tamaki's This One Summer, and Frank Santoro's Pompeii, and has welcomed them into the personal, hard won and unmistakable style that is his own, true kingdom.  It is a kingdom eminently worth visiting.