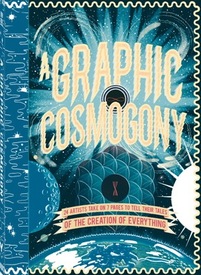 The fine folks at the London-based NoBrow Ltd. have produced their first anthology, and it's a doozy!  Editor, Alex Spiro has assembled twenty-four artists and, with a nod to The Book of Genesis, asked each of them to "take on seven pages to tell their tales of the creation of everything."  As those who are familiar with the NoBrow works on display here at Copacetic already know, their publications are finely crafted and produced in an engaged, hands-on manner, in keeping with the company's stated aim "to place a renewed focus on quality in print."  NoBrow maintains a special focus on hand-separated planes of flat color that gives their entire catalogue a wholly unique feel, and now, with A Graphic Cosmogony, they have produced an amazing 176 page hardcover volume – by a large margin the most ambitious assemblage they have yet to produce – that will pop your eyes out and knock your socks off!

Here's an excerpt from Paul Gravett's introduction, to give you an idea of where purveyors of this epic tome are coming from:

When it comes to the birth of comics, like the birth of the cosmos, it’s still open to speculation. The Book of Genesis might open with ‘In the beginning was the word’, but it seems more than likely that ‘In the beginning was the picture’. Or at least a picture which served as a word, a visual vehicle for representation and meaning. Mankind surely drew before we could write, but why make a distinction anyway? After all, the Chinese use the same word to mean both writing and drawing. And we know that many letter or word forms began as codified shorthand drawings of what they represented. We can only guess what the very first drawings looked like on the rocky walls of our very first art galleries, cinemas, decorated temples or stained-glass-windowed cathedrals, namely our earliest ancestors’ cosy, craggy caves. Most probably they included a life-size hand, daubed, smacked and printed straight onto the rock, and perhaps a simplified version of man himself, reduced to a symbolic, talismanic stick figure, the proto-cartoon or ur-comic....  The Biblical creation myth proposes that God created the world in seven days, or six plus one day off to chill out, so in that spirit the two-dozen cartoonist-shamans corralled into this compendium were given just seven pages to devise their own version of how we all got here. Some draw on tales from ancient traditions, such as Norse or Ainu legends or a universal mother’s womb of all things. Some illustrate mainly in stylised profiles, harking back to Egyptian tomb walls or Grecian friezes. Others mostly ignore previous versions – ‘It’s been done to death. You have to make it up’ – and take more oblique or satirical stabs. They try explaining the origins of everything as a magician’s act, a simulation game, a failed school assignment, a yurt-dweller’s break from boredom, the tears of a grief-stricken stag or the contents of a cyclops’ vacuum-cleaner bag or the head of Derek. It’s up to you whether you believe such ‘dubious facts’ as ‘ghost energy’, ‘ether-juice’ or the heresies of the ‘Masters of the Universe’. Entire world faiths have been built on equally unlikely accounts. Perhaps if enough readers of this volume start believing in certain stories, they might cause a spate of new religions to spring up based upon them.


This anthology is the most impressive we've seen since the last Kramers Ergot.  A Graphic Cosmogony is a standout in its ambition, scope and execution.  We can't help but get on our Copacetic Soap box here and single out one story in particular for praise: "Pilgrims," by Jon McNaught.  This story is not only a true tour de force in comics, with its greatest level of achievement lying in its masterful employment of page layout and the grid to indicate temporal and spatial duration, but it is one of the only stories we can think of that has ever directly addressed the relationship between the contemporary visual storytelling methods employed by comics and the tradition of visual instruction that was an integral part of Chrisitanity for over a thousand years.  "Pilgrims" A)  tells the story of "pilgrims" (there is certainly some irony involved in the use of this term) from, we are intended to assume, the Protestant north visiting a, presumably, Italian Catholic chapel; B) deftly parallels the chapel architecture with the architecture (grid) of the comics page and then links them together through the narrative panel art displayed on the chapel walls; C) relates this all to commodified consumerism which further links it to the history of comic books as being both art and commodity; and thus D) gives us an essential history of Europe (and, by extension, "the West" including America) through revealing the key linkages between religion, the visual arts and capitalism.  All in seven pages.  A work of inspired genius, we say.

BACK IN PRINT!!!  and... NOW AT A SPECIAL WELCOME BACK PRICE!
This item belongs to the categories: Gift Catalogue, Copacetic Select, Anthologies, International
You may also enjoy these related titles:

A Castle in England

Hilda and the Stone Forest