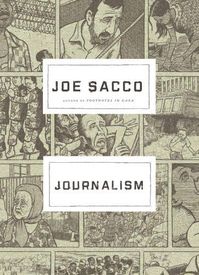 And, speaking of Joe Sacco, his latest tome has just arrived!  Journalism is a collection of "most of the shorter reporting pieces (Sacco) has done over the years for magazines, newspapers, and book anthologies," such as Harper's, The Guardian, Time, The New York Times, The Virginia Quarterly, and the French magazine XXI.  Sacco, ever the globe trotter, covers, fittingly, the International Criminal Tribunal for the Former Yugoslavia, the wars in Chechnya and Iraq, and revisits the Palestinian Territories.  He enters new territory – figuratively and literally – with his pieces on migration and India that close out the book.  Sacco has penned a new introduction for this volume, in which he argues for the place of comics in journalism, as well as providing end notes on the individual works.  Sacco has the most global perspective of anyone working in comics and he is a consummate professional.  The works that fill this volume are as engaging as they are informative and demonstrate just how effective comics can be as a form of reporting.  The comics in this volume open wide windows on peoples and places around the world that too often shut out.

This item belongs to the categories: Graphic Novel, Collections, Journalism & Travel
You may also enjoy these related titles: