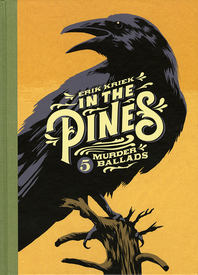 In the Pines by Erik Kriek adapts five "murder ballads": one traditional – "Pretty Polly (And The Ship’s Carpenter)", which has its murky origins somewhere in the early 18th century – and four composed in the latter half of the 20th century:  "The Long Black Veil" by Danny Dill & Marijohn Wilkin; "Taneytown" by Steve Earle;  Gillian Welch's haunting "Caleb Meyer"; and concluding with "Where the WIld Roses Grow" by Nick Cave. Printed in duotone throughout, with a different tone for each piece. Lyric darkness delineated.