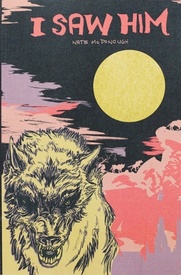 Dante’s Divine Comedy begins, "In the middle of the journey of our life, I came to myself, in a dark wood, where the direct way was lost,” establishing a narrative paradigm that has taken many twists and turns before arriving here in Pittsburgh, channeled through the ceaselessly drawing hand of Nate McDonough and taking the form of this work.  I Saw Him has been delivered to the Copacetic Made-in-Pittsburgh Table™ just in time to steep in the spirits of Halloween and Dia de los Muertos, and is tailor-made to pre-chill your bones in preparation for the long winter to come.  Set in the proverbial Woods, I Saw Him communicates a mood of pervasive anxiety about mortality that may put some readers in mind of American progenitor of the tale of existential dread, Edgar Allan Poe (to whom, we can’t help but note, its protagonist bears a passing resemblance) while the setting and action may bring to mind Nathaniel Hawthorne and Jack London.  McDonough’s notes indicate that he was accessing this mode through the 20th century cinematic works of Tarkovsky and Bergman, which makes sense, but the feeling here, while arguably more old country than new world in flavor, is distinctly pre-modern.  Regardless of all precursors, the aim here has been to create a timeless sense of mortal fear, one that can plug right into our own contemporary dreads that make up the daily news.   Nate has striven to capture a wintry walk through a light snow that doubles as a metaphor for the isolating effect of mortality and delivers his strongest art yet, with subtle snow fall and cold wintery breaths exhaled in a leafless and bare forest of varying density boldly delineated in strong contrast to the surrounding whiteness and grey sky, creating an interplay of tones that together set the stage for the bringer of the terror:  the pack of roving wolves; each of which are drawn with such devotion that readers will find themselves squirming in their armchairs as they close in…  The plot is bare bones, but takes twists and turns as it moves through the woods of its theme; by the end, you too will be able to say, “I saw him.”

This item belongs to the categories: Graphic Novel, Small Press Comics, Web Comics Collection, Made in Pittsburgh, Gift Catalogue
You may also enjoy these related titles: 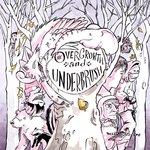