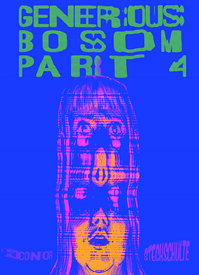 FINALLY!  The fourth and final issue of Conor Stechschulte's epic masterwork has arrived.  This fourth issue is – roughly – equal in length to the first three issues combined.  Get ready to have your mind turned inside out!

Here at Copacetic, we have refrained from commenting too heavily on Generous Bosom while the installments have been released over the last eight years or so, as it was recognized that a large part of the reading experience is not knowing what, exactly, is going on.  Now that the series’ denouement has been released and the work completed, it is time to open the floodgates and release the pent up commentary. While no plot particulars will be revealed in what follows, there are implicit reveals of aspects of the work that are deliberately withheld by the author until well into the series, and then only gradually shown.  These revelations are made here in order to provide an overall sense as to what the series may be getting at and of the overall experience that is in store for interested readers.

So, anyone reading this who would prefer to experience this work without knowing anything and/or would prefer to puzzle things out entirely for themselves might want to stop reading here and can do so with our assurance that Generous Bosom is an engaging, rewarding and one-of-a-kind read (and, if so inclined, can certainly circle back to this after having read the series).

Begun in Baltimore in 2012 and finished in Chicago in 2021, the creation of Generous Bosom spanned a tumultuous decade in world history, and provides a unique, strange and unsettling filter through which to view this period.

A stirring document of our transformative times, Generous Bosom takes a deep hard look at the manipulation of people – and by extension, populations.  In confronting global issues on a very human scale, it is specifically aimed at providing an up-close and personal accounting of the heavy but too often invisible costs of subverting individual identity in the name of control.  We are used to reading about these issues in simplified, generalized terms bandied about by partisans on both the left and right, and dealing with faceless masses on one side or the other, but the story that unfolds here is entirely non-partisan, and generally bereft of any ideological leanings.  It is, however, an inescapably gendered account.  One in which the agency of control is clearly aligned with the patriarchy and the perpetrators aligned with this power largely – but not exclusively – male.  And while male and female alike are the target of that control, it is clearly shown that this power exercises its control primarily through the manipulative dominance of females, the female body and the reproductive process.  Right from the outset, sex is shown to be a lever of control.  Generous Bosom confronts both the control of sexual activity and sexual activity as control.  There is, further, no question that the author’s sympathies here are with the women; with the maternal as opposed to the paternal.

The plasticity and malleability of memory lie at the core of this work along with the manipulation of perceptions through the power of suggestion and through technologies that are surreptitiously employed.  In even going so fas as to include those involving nutrition, Stechschulte acknowledges the body-mind connection as well as mind-body.  And, in other aspects of the narrative, does so in such a way as to connect this to “body issues” among women, and how they can be triggered and/or generated by outside suggestion.

In a tour de force of comics sophistication, Stechschulte developed a complex visual schema that includes color variation, layering and differences as subtle as line weight and color density to specifically assign the representation of realities, memories, fantasies, dreams, and stories told, and their blending with beliefs suggested and memories that are artificially implanted. These tools enabling an increased degree of communicatory power in order to take on the challenge of confronting and revealing the manipulations to which we are subject.  Generous Bosom demands a significantly higher degree of concentration than that required to read most comics, and for those who commit to meet those requirements the experience drives home what a complex and heady mix our identities are – along with the undeniability of their being constructions.

The larger message/implication of the work is that as technology ever further impinges on our lives and shapes our reality, not just through the manipulation and distortion of events, but also through their displacement, we – all of us – are living, to varying degrees, artificial, inauthentic lives that have been created by others and been imposed on us without our consciously given permission in order to advance the hegemonic interests of these others.

Inevitably, at some point, the question arises, “Is this all about how social media messes with our minds?”  And, while the answer has to be some sort of, “Yes,” it is unlikely that this aspect was consciously involved in the genesis of the work, and may not necessarily been at the forefront of Stechschulte’s mind during its creation – but it's in there somewhere.

And, the seeming disconnect between the work’s title and its contents is a point worth pondering.  While the most common, current usage of bosom is in conjunction with female anatomy, it is a fairly old word with multiple meanings and connotations, some linked to closeness and connection –  think “bosom buddies” and “in the bosom of one’s family” – and including, somewhat archaically, of relating to one’s inner thoughts.  It is in the coming together of these various threads of meaning in this word that its appropriateness as part of the title becomes clear.  And, the generosity on display can be seen as that engendered on the part of the core group by the commonality of their humanity and by the shared recognition of their experiences of being equally deceived and in need of assistance.

Here's a new interview with Conor on Solrad that's definitely worth checking out (but is in depth enough that it might require some sort of spoiler warning).

Worth noting:  the first three issues are also once again available.  We recommend anyone interested these act now!

We apologize for the higher price on this issue.  It is primarily due to the issue costing more to print that Breakdown (who are in the UK) expected, and so our cost was proportionately higher.

And, finally, to those for whom the undeniably hefty price tag for the entire series is a bridge too far, we can at least hold out the hope that this work will eventually be released in a more affordable single volume edition, as it is certainly deserving of a wider audience*.

YIKES!  All gone.  We'll do our best to get this back in stock as soon as possible.  Please check back.

* And... It is!  Fantagraphics is releasing the complete Generous Bosom as Ultrasound (which is the title of the film adaptation of this work; yes, you read that correctly) in mid-2022. 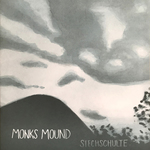