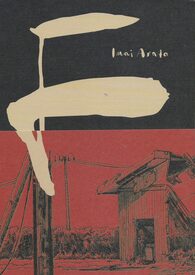 F, originally self-published in Japan in 2015  – in a limited edition of a mere 200 copies – by its creator Imai Arata (in cahoots with Chaos*Lounge, an arts collective), is about as Underground as it gets, as this volume's translator and co-editor (with publisher emuh ruh), Ryan Holmberg explains in his in-depth, 29 page essay accompanying this edition from Glacier Bay Books.  Written in the wake of the Fukushima nuclear reactor meltdown that was triggered by the massive tsunami of March 2011, Imai wove a speculative tale that used as its starting point the dissatisfaction with the central government in Tokyo that was expressed in the region surrounding the reactor disaster.  He goes on to imagine that dissatisfaction metastasizing into an outright rebellion in which the Tohoku region secedes from and goes to war with Japan.  Imai further speculatively extrapolates on then-current events, when this group is infiltrated and then warred upon in turn by a group of terrorist guerillas (modelled on IS) and chaos reigns.  It is into this milleau that the character of international reporter, John Cantlie thrusts himself and his "story" becomes one with that of the manga.

Imai's art is somewhat amateurish – certainly by Japanese standards, at least – but the storytelling is solid.  Originally titled I Am John Cantlie when published in Japan, Ryan Holmberg believes that it would likely have been a highly controversial work in its home country, due to the nature of its content.  But because of its extremely limited release, it managed to slip through unnoticed by the wider public.  This extremely limited original Japanese release also provides F  with the rare distinction of being a manga of Japanese origin receiving a wider circulation in North America than in Japan!

To learn more about F and preview several spreads from the work, check out Helen Chazen's review on The Comics Journal, HERE.

This item belongs to the categories: Graphic Novel, International, Small Press Comics
You may also enjoy these related titles: