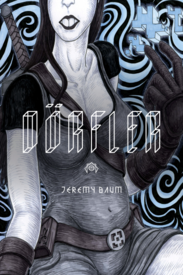 Dörfler shows artist and writer Jeremy Baum playing to his strengths in his first work for Fantagraphics Books.  This 96 page oversize hardcover is filled with lush, full color pen and marker drawings which largely hew to the blue and grey spectrum, only occasionally allowing for a dash of red, and entirely eschewing the yellowed bands of the spectrum, from orange to green; making for a cool world, indeed.  And this cool world oscillates between technology and nature (but a nature that may be illusory and/or artificial, a possibility hinted at by the limited color spectrum employed), the controlled ego and the libidinous id, male and female, and in which the latter dominates the depicted diegesis while the former dominates the narrative direction.  While the visual tropes employed here are largely those of science fiction and fantasy – futuristic cityscapes, mysterious technical apparatus, robots, wizards, elves, etc. –  and they are immediately engaged in the service of SF concepts such as inter-dimensional travel that appears to transpire on a physical plane, readers are likely to eventually find themselves immersed in a sensation of having entered into a dream world, where borders between levels of consciousness – subconscious, unconscious, dream-states both night and day, induced or not – are entirely porous and lead to a maze of sexual desires and fantasies and their relations to social power structures' imposition of will through technology.   Jungian / mythological archetypes, nature symbology and more are deployed in strategies of coercion as well as in its resistance.  Manufactured illusions of community which can be – and are –subverted to create actual communities, “mind control” and its usurpation, are encoded in a manner that intimates William Burroughs more than H.P. Lovecraft.  All this is accomplished primarily through visuals.  The text here is minimal and map-like; primarily employed to keep the reader properly oriented.  Dörfler has no real beginning, middle or end, there is no closure, no exit.  It is a souvenir of a visit to a state of mind, one that is very engaged in seeing and being seen, looking and drawing, capturing the fleeting sensation, the stray thought, as it scampers through the mind, and holding onto it long enough to send the necessary signals to the hand to record it  in lines on paper, in comics form.

This item belongs to the categories: Graphic Novel, Made in Pittsburgh
You may also enjoy these related titles: