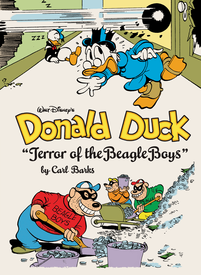 The latest volume* in The Carl Barks Library has arrived.  This time around we have three full length Donald Duck clasic adventures.  First up is "Dangerous Disguise",  which is notable for featuring characters -- all, intriguingly, spies, with most of the "screen time" devoted to one femme fatale -- that are rendered as a normative human figure, while all around her are ducks; a rarity with Barks.  Next up is "No Such Varmint", a  classic travel adventure story that riffs on the Loch Ness monster myth.  And then we have "In Old California", another unique tale in the Barks oeuvre, in which Donald and his nephews travel back in time to 1848, courtesy of some "herbs" given to them by an indian medicine man.  Barks packs a lot into this story:  wealth, class, ethnicity, gender roles, and of course, good and evil, right and wrong, and their relations to beauty and ugliness.  This story features Barks's only employment of cameo insets that we can think of.  It also has some of his most packed compositions, both within individual panels and through individual pages; you really feel him struggling to pack it all into the 28 pages allotted.  It is also unique (so far) to The Carl Barks Library in that it is the first full length tale to be colored by someone other than series colorist Rich Tommaso.  "In Old California!" was colored by Joseph Robert Cowles -- to good effect, we should make clear -- and it stands out for its relatively subdued hues of generally darker tones than what readers have become accustomed to with Tommaso.

Then, we have a batch of eleven classic ten-pagers, including the title track, the most significant of which is that keystone of Barksian economics that has been dubbed, "A Financial Fable."  Here Barks explicitly lays out a central pillar of what he has as Uncle Scrooge's underlying understanding cum philosophy of money as labor and thrift as the means of its preservation and extension. While this is of course and of necessity a greatly simplified (and hugely reductive) take on a highly complex subject, for a ten-page story originally created for a ten cent comic book, it stands alone in its presentation of the function of money in a capitalist society.

Wrapping things up we have an eight-pager featuring Grandma Duck, Daisy Duck, Gus Goose and Black Pete (!) in a rare cross-over from the Mickey Mouse universe wherein he is normally found. This story was additionally unusual in that it was originally published in an issue of Walt Disney's Comics & Stories that already had a Barks ten-pager, giving those lucky 1951 readers the rare treat of getting two Barks stories in one issue.

*(Those among you suffering from numerological leanings and OCD inclinations will be intrigued to note that while the volumes in this series have been released starting more or less in the middle of the series -- the first volume released was Volume 7 -- this volume is both the tenth volume to be released and actually is Volume 10.  Will this be the only volume in which the two numberings are in sync?  Probably not!  Should anyone care about this?  Probably not!)

This item belongs to the categories: Classic Comics Collections, Gift Catalogue, Kid Friendly
This item is part of the series: The Carl Barks Library
You may also enjoy these related titles:

Donald Duck Box Set: Lost in the Andes and Trail of the Unicorn