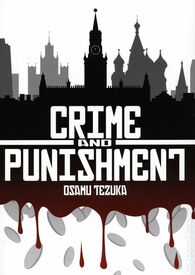 Tezuka boils down Dostoevsky's classic novel to its bare essentials – it runs a mere 144 pages – and adds slapstick comedy, for good measure.  This (sometimes very Disneyesque) adaptation was originally published fairly early on in Tezuka's career, in 1953, and he later went on to view it as "a bit of a disaster" – but also stated that, at the time of its publication, this work "received more encouragement and praise from students and adult readers" than he had previously experienced.  So, it must have done something right.  Regardless, there's some great cartooning here, including the murder sequence, which is an amazing eleven pages divided vertically into twenty-two static panels of the apartment staircase where the murder takes palce, that brings to mind Will Eisner and Frank Miller.  Some (many? most?) may find the cartooned depiction of Dostoevsky's weighty themes a bridge too far (as in, "Crime and Punishment as a Disney cartoon?  Are you serious?")  but others may delight in the combination.  And this piece certainly foreshadows Tezuka's tackling of weightier themes in his own, original, mature period manga, later in his career.

We hope to have this back in stock in late June.  Please check back.

The Book of Human Insects