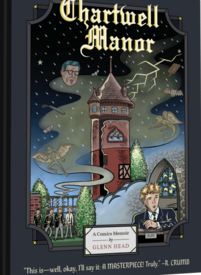 Glenn Head's memoir, Chartwell Manor is an open, revealing and harrowing account of his years spent in a boarding school headed by a deranged and abusive head master – as well as its aftermath.  While the book, being a memoir, naturally focuses on Head's own experiences, he also weaves in a series of vignettes of encounters with other of Chartwell's alumni which, taken together with his own, provide a damning account of the life long consequences of the traumatic experiences undergone there during those formative years.  Most intriguingly, Head effectively demonstrates the ethos of the boarding school as being of a piece with and/or an extension of that of his own parents.  That it was the needs and feelings of the supervising adults that were paramount, and that it was up to the children under their charges to adapt in order to survive.  And, as Chartwell Manor amply illustrates in its 244 pages of hard won black and white comics, these adaptations often took the form of personality mutations and malformations that in turn led to substance (i.e., drug and alcohol) abuse, which in turn amplified these personality changes in a vicious cycle that could – and did – take the better part of a lifetime to escape from and/or work through.  This isn't a book for everyone, but it definitely hit a nerve for many an old school independent and/or underground cartoonist, as these testimonials amply testify:

"This is a great graphic novel!  I couldn't put it down... starkly honest, a powerful story... the level of merciless self-examination – wow! I was deeply impressed.  Head has traveled a long way to get to this point.  This is – well, okay, I'll say it:  A MASTERPIECE! Truly." – R. Crumb

"I loved it! Chartwell Manor is a painful, riveting, and brutally honest memoir – possibly the most honest one I've ever read.  This clearly took a lot of guts to produce, as well a lifetime to process!" – Peter Bagge

"A troubling but important piece of graphic work.  If you're new to Glenn Head's comics, then this book is a perfect place to start." – Noah Van Sciver

"Born too late to be a member of the original Underground, this establishes Head as being on equal footing with the best cartoonists of those tattered ranks.  With his unique cartooning style and lean and mean prose, he is keeping the flame of the original genre alive... He somehow pulls this off with zero pretension, astonishing honesty and understated wit." – Justin Green

This item belongs to the categories: Graphic Novel, Featured Item
You may also enjoy these related titles: