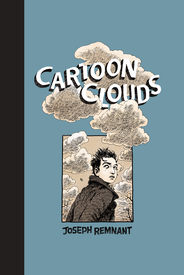 With Cartoon Clouds, Joseph Remnant at long last delivers on his promise.  First coming to comics prominence through his art chores on his collaboration with Harvey Pekar's love letter to his hometown, the hardcover graphic memoir, Cleveland.  Remnant has also published three issues of his solo title, Blindspot, as well as the short story, "I Told You So," that appeared first in the Little Heart anthology, and was recently reprinted in the latest issue of Kilgore Quarterly, and which was obviously the seed from which Cartoon Clouds grew, and in which he reveals his proclivity for romanticism.  Here we have the latest iteration of The Portrait of the Artist as a Young Man – As an Early 21st Century Boy (Just Out of College, and Nowhere to Go).  It is well told and a much appreciated tonic to the shrill tenor of these times.

Starting with the front cover image, which evokes a young, "Freewheelin'" Bob Dylan, and – with a single leaf in the sky – Pekar's (via Crumb) "American Splendor," Remnant's hard won comics deliver flesh & blood characters who live and breath on the page.  These characters love and yearn and gradually learn as they make their way through lives that orbit the sphere of art, powered by creativity and on the quest for inspiration.