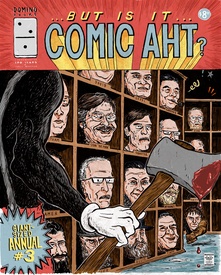 If you like Bubbles then rthere's a very good chance you'll also dig But Is It... Comic Aht?  Published, annually (roughly), and edited by Austin English, But Is It...Comics Art? has been for the last three year or so – premiering, if memory serves, around the same time, perhaps shortly before, Bubbles – exploring and celebrating the (small) world of small press, self-published comics, where, as John Porcellino states in this issue, readers will find comics that are "beautifully produced, lovingly put together, masterfully written" by "artists making work beholden to nobody but themselves" who have "goals and creative plans to best survive as self-sufficient artists."

This issue is the biggest and best yet, chock-a-block with engaging articles, engrossing interviews and amazing comics, and running 88 magazine-size pages, black and white with occasional color, printed on high quality newsprint.  Here's a run down of what's in store for readers this time around:

-a career retrospective interview with Mary Fleener by Tim Goodyear

-an in depth conversation about what mini comics distribution is and isn't, with John Porcellino

-An interview with E.V. Glenn by T Edward Bak

-Tim Goodyear mini comics round up

-Keith Jones on forgotten comics of the past

-Ariel Cooper on why she makes comics

-Clara Bessijelle on dreaming about comics

-Back cover by Aidan Koch

This item belongs to the categories: Journalism & Travel, Small Press Comics
You may also enjoy these related titles: