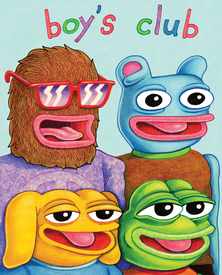 The long dry spell has ended.  Matt Furie's pæan to roomfulls of young men out of their minds on drugs has at last been collected into this compact softcover edition.  Keeping the dimensions of the original comic books in which these stories originally appeared, this Fantagraphics edition prints the strips in a multicolored series of monochrome pages, the color changes between which serve to demarcate their divisions.  The opening intro and closing outro pages are printed in green; the first section (which we are thinking corresponds to the first issue of the series, but can no longer recall -- anyone know for sure?) is printed in blue; the second in a mustard sienna; and the third in plum mahogany (no black & white here!).  176 pages of non-stop stoner-funnies in all.  In comics lineage, the Boy's Club comics are more or less the link between the Ben Jones / Paper Rad BJ and tha Dogs-era work and Simon Hanselmann's Megg, Mogg & Owl strips that are defining our present disaffection (but you already knew that).