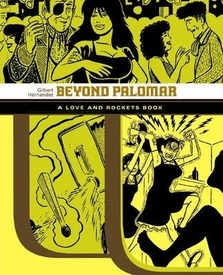 (Book Six in the New Edition of the collected Love and Rockets)  Wow!  Fantagraphics isn't wasting any time in getting out the newly formatted editions collecting that classic among classics, the original first volume of Love and Rockets by Los Bros Hernandez.  Beyond Palomar contains all the twists and turns of "Poison River," perhaps the most complex  – as well as violent – of Gilbert's epics.  "Poison River" originally cascaded through 12 issues of Love and Rockets (#29 - #40) over the course of close to four years (1989 - 1992), providing a portrait of Luba's mother, Maria – along with what could be construed as Luba's origin story – that does double duty analyzing the machismo undergirding Mexican culture.  Gilbert then makes a massive pivot with the following story, the L.A.-centered "Love and Rockets X," whicn not only demonstrates his brobdingnagian range, but by being paired here with "Poison River," also contains an implicit comment on the relative naiveté of young Americans.  There's quite a bit more that can be said about these comics, but for the time being we are going to limit ourselves to directive, "READ THEM!"  It really doesn't get any better than this.