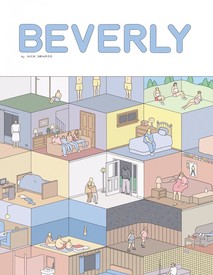 Having absorbed the work of Dan Clowes, Adrian Tomine, Charles Burns and Chris Ware, among, of course, many others, Drnaso emerges here with the first substantial synthesis of these approaches to revealing the human -- and, specifically, the American -- condition in this subtley linked and gradually revealing collection of cleanly delineated depictions of the messy interior lives of some superficially bland middle Americans.

Chris Ware has this to day about it:  "Nick Drnaso's Beverly captures such a recognizable, raw feelilng of the "Now" that if it was a film, Drnaso would heralded as a "stunning new directorial voice."  If it was a novel, he would be a "literary sensation."  But Beverly's chilled windowpane views into the fogged American psyche are not the cartoon copies of film or literature.  They're someting completely new.  A debut book by a youmg writer-artist who has not only absorbed buyt advanced beyond the comics which have preceded him.  Beverly is the finest and most electrically complex graphic novel I've read in years, announcing an intelligent, shrewd and disquieting talent not only to comics, but also to writing and visual art.  It will set its barbs in you and not let go."

Whew! that's about as good as it gets in the plug department.