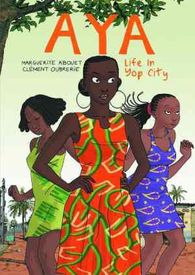 This ia a softcover 3-in-1 omnibus of the three hardback Aya graphic novels previously released by Drawn & Quarterly over the last five years or so:  Aya, Aya of Yop City, and Aya, the Secrets Come Out.  It also additionally contains a healthy portion (32 pages or so) of bonus support materials not found in the original volumes.  Priced at barely more than one of the originals, this is a bargain!  More than that, it is well over 300 pages of beautifully drawn and lushly colored comics depicting late 1970s life in the the west African republic, Côte d'Ivoire (the Ivory Coast to us Anglophones).  These comics will immerse readers in this far off land, and we're confident that all readers will be looking forward to the return visit promised by the follow-up volume, Love in Yop City, an all-new (to North American readers) omnibus, due in 2013!