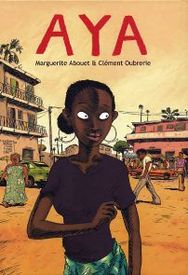 A pitch perfect tale, sensuously rendered and sumptuously colored, Aya takes us to the Ivory Coast in what are now seen as the halcyon days of 1978.  Abouet & Oubrerie -- names which were new to us, but which we'll be sure to keep on the look out for from now on -- have done a simplly splendid job here.  The action centers on a trio of teenage girls, and widens to trace their interactions with their families, the community that is their home and, of course, boys.  The structure and the pacing are right on target, allowing the reader to follow a large and fairly complex cast of characters while the story keeps sailing ahead at a brisk pace (think Robert Altman, but without the bitterness).  The characters, the dialogue, the settings, and especially the colors:  everything comes together to create a real verisimilitude, a sense of being right there in the thick of it in the Abidjan suburb of Yopougon in 1978.  Also included are a glossary of Abidjanian slang used in the story, along with some fashion & etiquette tips and recipes, and also a preface by Alissa Grace Chase, PhD, who will fill you in on the historical context in which this story plays out.  And there's more:  after finishing the book and having had a moment or two to reflect upon its contents, you are likely to feel as we did that the story told in Aya, while rich in Africana, contains much that is the same the world over, and some universal truths to boot.  This full color hardcover from Drawn & Quarterly is a treasure.

This item belongs to the categories: Graphic Novel, Gift Catalogue, International
You may also enjoy these related titles: