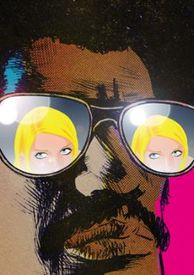 Well, here's a work that sets the table for multi-course feast that will appeal to folks of different stripes for different reasons.  First and foremost, it is the most ample display to date of the pop culture prowess of the Pittsburgh-based artist/writer team of Jim Rugg and Brian Maruca, who here have given a virtuoso performance.  Afrodisiac is an homage to the last gasp of traditional comic book values; specifically, those that were embodied by the comic books of, roughly, 1972 - 1985.  These were the final years of the newsstand comic book market – its decade of irrevocable decline.  Beginning in 1986 it was permanently eclipsed by the direct market, a turn of events which not only forever altered the perception and reception of comic books, but simultaneously led to a a substantial and equally permanent change in their values and production.

The work contained in this compact, full color, hardcover volume demonstrates a deep intuitive understanding of the the tropes and formulas of traditional newsstand comic books, as well as, and perhaps most significantly, the role played by the wide variety of production and reproduction processes and techniques through which the raw language of comics passes en route to becoming the actual physical end product comic book that transmits its content through the readers' sensory apparatus, and thereby promulgates its meaning to the end consumer: human consciousness.  Conscious manipulation of the denotative capacities of production processes has a history that goes back at least thirty years, to Art Spiegelman's work in Breakdowns, and it continues to be employed successfully in works such as Paul Hornschemeier's The Three Paradoxes.  Afrodisiac is, however, unique in that, here, this conscious manipulation is the driving force behind the entire project, and is encoded in the texts as well as the images, with the character of The Afrodisiac acting as a cypher – one that is simultaneously a celebration and an elegy – for the uncritical creation of unabashed power fantasies that was no longer possible in the wake of The Dark Knight Returns and The Watchmen.

Jim Rugg is a one-man production house and he has put the pedal to the metal in his reclamation of a panoply of production processes in this pandemonium procuring panegyric to the blaxploitation genre (that was itself an embodiment of the last gasp of the classical Hollywood values that vanished in the wake of the blockbuster onslaught of Spielberg, Lucas & Co.).  It is here, in this nostalgic conflation of blaxploitation's own uncritical creation of unabashed power fantasies with those of comic book superheroes, by, let it be said, a couple of middle-class white guys, that another layer of signification transpires.  Certainly, an exploration of the text's Playing in the Dark is warranted, and an old Lou Reed song may come to the mind of readers of a certain age; and, the fact that the power fantasy on display in these pages is of a distinctly sexual nature and is employed in the domination and exploitation of women cannot be ignored.  Yet, all is rendered with a clear sense of humor, and where level, intellectually engaged heads prevail, there are sure to be some interesting and potentially valuable correlations made (cultural anthropologists, please take note). In other words, Afrodisiac is one of the densest texts one is likely to come across; and while many will doubtless find it a source of uncritical enjoyment, those who do so will be doing themselves a disservice and missing the work's essential character.  To get a head start processing this sucka', download this PDF preview.

This item belongs to the categories: Graphic Novel, Copacetic Select, Collections
You may also enjoy these related titles: