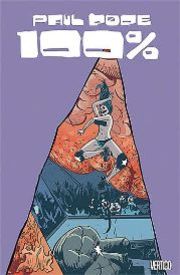 100% by Paul Pope Pope's most accomplished work is now back in print in this (unfortunately over-priced) hardcover edition.  It's a great piece, we just wish the powers that be at DC didn't yield to the greedy need to rob Paul Pope's fans (and we also can't help but wonder what degree of complicity Pope himself shares in this).  Why is this book – which, we feel compelled to note, is the third incarnation of this work (it first appeared as a four issue series, then as a softcover), which means they're all getting paid yet again for the same piece – priced a full 100% more than Jeff Lemire's The Nobody (listed below), which is identical in format  – hardcover, black and white – also published by Vertigo, distributed through the same networks, and is an original work appearing for the first time.  We're offering a special discount on it, which takes a bit of the sting out, but only a bit.

This item belongs to the categories: Graphic Novel, Collections
You may also enjoy these related titles:

Pulphope: The Art of Paul Pope