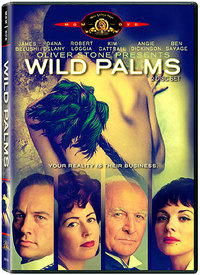 One of the most singularly unusual television shows in the history of the medium, Wild Palms (obliquely referencing the Faulkner novel from which its title is taken) is an ultra-paranoid political thriller that takes place in  world clearly reminiscent of David Lynch, whose own unique foray into television, Twin Peaks, concluded its broadcast two years before this was aired in 1993 and was an obvious inspiration for the dream like ambience on display here.  It is important to keep Lynch in mind when watching this series, the 6-episode entirety of which is available on this low priced two-disc DVD, to fully appreciate and enjoy it.  Like Lynch's work, Wild Palms is not overly worried about verisimilitude.  That the action is supposed to take place in the year 2007 adds to the fun of watching it today.

In 1993 the world wide web was in its infancy and the ideas of what the future of the this new medium would hold were informed more by the works of science fiction author William Gibson (who makes a brief cameo appearance early on) than by the reality on the ground, and are a bit laughable to watch now a mere fourteen years in the future.

What is not laughable, however, is the creepy ultra-politicized world of the future that is painted in Wild Palms.  There is more than a whiff of accuracy here.  The story employs a staple of science fiction technique by taking aspects of ancient history and tarting them up to make them look like a prophecy of what's to come.  In this case, the vicious internecine inter-family/tribal warfare that Wild Palms postulates as our future appears to be inspired by the bloodthirsty struggles for power that took place between and amongst the aristocracy of Europe -- both temporal and religious -- as that continent consolidated its ascending power between the 14th and 17th centuries; perhaps, specifically, that involving the Borgias (Rodrigo Borgia became Pope Alexander VI exactly 500 years before this series was made, the year Columbus discovered America), but with Los Angeles in place of Rome and Scientology instead of Catholicism.  Doing this is not without a point, however, as it may be argued that the United States is currently going through an equivalent phase in its history and that is precisely when history is liable to repeat itself -- or, if not repeat, then, at least, rhyme.  Thus are all prophecies based, to a degree, in a comprehension of history.

At times, the screenplay seems to be striving for the effects of the great Greek tragedies of Aeschylus  (although clearly falling short of achieving true tragedy -- this is, when all is said and done, still a television show made in Hollywood, and so, of course, there's a "happy" ending for the lead; but if you discount this, the fates of every other character is a tragic one:   all overreach and all are destroyed through their overreaching by their tragic flaw, which is, in all cases either hubris or weakness) as well as aspects of classic Japanese samurai epics.  When all is taken into consideration, however, it is, ultimately, paranoia that is at the core of this work.  Every statement made by every character at every moment is, either wholly or partially, false.  Every action contains a deception. The entire world is nothing more -- and nothing less -- than a complete and utter fabrication.  Everyone is living a lie.

Wild Palms is, in certain respects, what some critics might label a "comic book" type story, in that characters are close to caricatures -- and the casting for this show was excellent in this regard -- whose actions are often driven more by the demands of the over-arching plot structure than by rational self interest, and much seems patently absurd when taken at face value.  But, as with comic books, it is a mistake to take actions at face value, but rather it is more to the point to view all as metaphor and allegory and to look for meaning in patterns and relations between actions rather than in the actions themselves. (although, clearly, this distinction/definition of "comic books" as such has long since been invalidated; it is used here simply to refer to a certain historical aspect of comic books that has been usefully identified by critics as a shorthand for a specific approach to narrative).  Well, Wild Palms did in fact originate as a comic strip feature, penned by Bruce Wagner -- the author of the screenplay -- which appeared in one of the previous incarnations of Details magazine.

For the intersection of dream life and political reality there has never been a television show produced in the United States -- and few if any cinematic works -- to rival this one.  Wild Palms brings to mind Buñuel's oeuvre to find works of equivalent interest in this regard, such as Viridiana and The Discreet Charm of the Bourgeoisie.

Robert Loggia's performance as a ruthless nightmare combination of corporate CEO (of media company no less), US Senator and religious zealot must be singled out as an amazing tour de force embodiment of all that is scary in the halls of power.