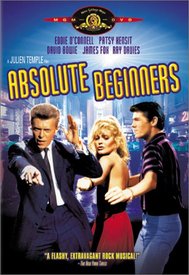 This is one of the most overlooked films of the 1980s.  An absolute masterpiece, Absolute Beginners attempted the impossible:  to single-handedly revive the Hollywood musical, and from England, no less!  While, clearly, it did not achieve the impossible, you can, if you try, trace a line from this film that goes slowly-but-surely, step by step, straight through to Moulin Rouge, and, more recently, Across the Universe and a generally more favorable environment for flashy, spectacular cinéma entertainments that, Lord knows, we could all use more of these days.  This is a film where, clearly, everyone involved gave their all, and everything fell into place, just right.

The film takes place in London during the late-fifties la dolce vita that took place all over a Europe that was finally emerging from the clouds of the second World War, as the first generation that was too young to really remember it started coming of age and was ready with a fresh face to put the best foot forward.  Optimism is the word we're looking for here. But it's not as if there's not conflicts aplenty as new world Jazzers find themselves up against old-world Teds with more than a whiff of fascism and racism behind them-- qualities that are -- ironically if not paradoxically -- revealed to be spawned at least in part by behind the scenes maneuvering by American business interests, the same America that brought the Jazz to the UK that inspires the Jazzers.   There is in this film, along with a great dollop of entertainment, a more complex reading of cultural and political affairs than in perhaps any movie musical ever made -- we kid you not!

Featuring absolutely wonderful supporting roles for David Bowie and Ray Davies -- among others -- the film's poor reception in the USA may be traced -- in addition to the fact of the film's subtle critique of US projections of power mentioned above -- to its leads lacking that je ne sais quoi known as "star power."  Patsy Kensit and Eddie O'Connell put in excellent performances, but they lack that larger-than-life quality.  This may very well have been an intentional decision by Temple and is in keeping with his critical reading of US values, and it can be a good thing, and is here, as it allows the audience a deeper identification with the fantasy.  And speaking of fantasy, Sadé's career received a big boost from her fabulous cameo performance as a nightclub chanteuse.  Wow!  But for all her oomph!, Sadé still doesn't win the top spot for musical performances in a film that's chock-o-block full of them.  Ever the cerebral rocker, David Bowie's number, "That's Motivation" deconstructs advertising and clearly associates it -- with more than a little help from a send-up setting-- with Americanism.  "The Quiet Life,"  performed by Ray Davies, is a tongue-in-cheek number that perfectly sums up his character in a musical skit that is a set piece in and of itself (not to mention being an homage to Jerry Lewis's masterpiece, The Ladies' Man). Without any doubt, however, the top spot is reserved for none other than the one and only Slim Gaillard who rules the roost with his quintessential party number, "Selling Out!"  If this number fails to put a smile on your face and a tap in your toes, well then, you're already dead!

Julien Temple clearly deserves recognition here for a thoroughly excellent job all the way around.  The mind-bogglingly complex opening -- which cinéphiles will note replicates the most choreographed (and celebrated) opening crane shot in the history of film, but in coordination with a dynamic dance choreography which, like others in this film, owes more than a little to Jerome Robbins's work in West Side Story -- bespeaks a diligent intelligence applied with thoroughness in the service of creative risk taking.   And a lot was risked here:  A great film was made and, on this side of the Atlantic, ignored.  And while Mr. Temple won creatively, he lost career wise.  Getting his start with the notorious Sex Pistols film, The Great Rock 'n' Roll Swindle, he continued directing after Absolute Beginners -- most notably Earth Girls are Easy, the film that (more or less) introduced the talents of Jim Carrey, Damon Wayons, and Julie Brown to the movie going public -- but has, at least thus far, failed to return to the heights of achievement embodied in Absolute Beginners.

Yes, there are several moments in the film that fairly scream 1980s & MTV, but these are thankfully few and far between, and cause only barely discernable blips on an otherwise smooth and graceful ride provided by the beautifully designed, magnificently constructed and well maintained entertainment machine that is Absolute Beginners.  Pop it into your player and hop on!