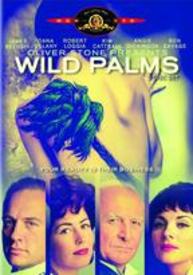 Without doubt one of the most singularly unusual television shows in the history of the medium, Wild Palms (obliquely referencing the Faulkner novel from which its title is taken) is an ultra-paranoid political thriller that takes place in a world clearly reminiscent of David Lynch, whose own unique foray into television, Twin Peaks, concluded its broadcast two years before this was aired in 1993 and was an obvious inspiration for the dream-like ambience on display here. It is important to keep Lynch in mind when watching this series, the 6-episode entirety of which is available on this low priced two-disc DVD, to fully appreciate and enjoy it. Like Lynch's work, Wild Palms is not overly worried about verisimilitude. That the action is supposed to take place in the year 2007 adds to the fun of watching it today. In 1993 the world wide web was in its infancy and the ideas of what the future of the this new medium would hold were informed more by the works of science fiction author William Gibson (who makes a brief cameo appearance early on) than by the reality on the ground, and are a bit laughable to watch now a mere fourteen years in the future. What is not laughable, however, is the creepy ultra-politicized world of the future that is painted in Wild Palms. There is more than a whiff of accuracy here. It takes a staple of science fiction in taking aspects of ancient history and tarting them up to make them look like a prophecy of what's to come. In this case, that of vicious internecine tribal warfare that looks like it was inspired by the bloodthirsty struggles for power amongst the European aristocracy -- temporal and religious -- such as that involving the Borgias (Rodrigo Borgia became Pope Alexander VI exactly 500 years before this series was made, the year Columbus discovered America), but with Los Angeles in place of Rome and Scientology instead of Catholicism. The West Wing this is not.