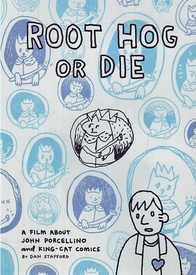 Now would be a good time to bring to your attention this documentary film which takes John Porcellino as its subject.  Yes, you heard that correctly, Root Hog or Die is a feature length documentary film on the life and times of John Porcellino.  What's more it serves as a highly appropriate complements Hospital Suite as it too delves deeply into health issues - both physical and mental, and works to situate them in John's life story as well as contextualize them in relation to his work (although less the latter and more the former).  The film's maker, Dan Stafford – co-founder/owner/manager, with Luke James, of Kilgore Books & Comics of Denver, CO – spent years putting together this film, and roams far afield to interview both of John P.'s exes (the first of which is interviewed with John, as they sit together and reminisce about the bad old days) along with a host of other folk from Porcellino's past and present personal and professional life, including Noah van Sciver, here seemingly cast as John P.'s teen (not) sidekick, and Zack Sally, John's concerned peer.  Worthy of special note is the inclusion of a live musical performance by John with one the band's of his youth, playing at an outdoor festival; get ready to rock out with a young – and long-haired! – John P. & Co.