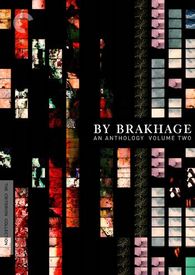 By Brakhage, Volume 2 << • >>  Here we have it:  a whopping seven and a half hours of work by the undisputed master of independent American experimental cinema, selected by his widow, Marilyn Brakhage, and expertly transferred to digital media by the Criterion Collection Crew.  While most movie-goers have never even heard of him, it's hard to over-estimate Brakhage's impact on the history of film.  Beginning in the 1950s, he opened up a whole new way of thinking about and working with film.  It could be said (and so, we will) that what Einstein was to Newton in the realm of physics, Brakhage was to Eisenstein in the realm of film.   Learn quite a bit about what's on this 3-disc set by reading this in-depth essay by Ms. Brakhage.

This item belongs to the categories: Featured Item, Copacetic Select
You may also enjoy these related titles: