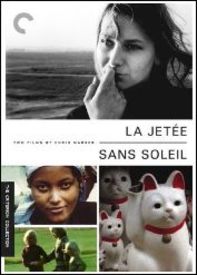 Synopsis
One of the most influential, radical science-fiction films ever made and a mind-bending free-form travelogue, La Jetée and Sans Soleil couldn’t seem more different—yet they’re the twin pillars of one of the most daring and uncompromising careers in cinema history. Chris Marker, filmmaker, poet, novelist, photographer, editor, and now videographer and digital multimedia artist, has been challenging moviegoers, philosophers, and himself for years with his complex queries about time, memory, and the rapid advancement of life on this planet. These two films—a tale of time travel told in still images and a journey to Africa and Japan—remain his best-loved and most widely seen.

New, restored high-definition digital transfers, approved by director Chris Marker  New video interview with filmmaker Jean-Pierre Gorin Chris on Chris, a video piece on Marker by filmmaker and critic Chris Darke  Two excerpts from the French TV series Court-circuit (le magazine), directed by Luc Lagier: the first, a look at David Bowie’s music video for “Jump They Say,” inspired by La Jetée; the second, an analysis of Hitchcock's Vertigo and its influences on Marker  Both films presented in two versions: English and French with English subtitles  New and improved English subtitle translations
You may also enjoy these related titles:

Stranger than Paradise
I Vitelloni
Mamma Roma
The Lower Depths