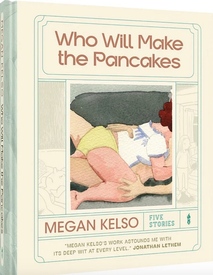 Finally, a new collection from Megan Kelso!  Who Will Make the Pancakes collects Kelso's major works of the last fifteen years (it's hard to believe it's been over a decade since her last book, right?).  Here in this 200 page hardcover edition, we have five substantial stories – one each pen & ink with process color, water color and  colored pencil, as well two in straight up pen & ink black & white – ranging in length from 24 to 60 pages.  Starting off with "Watergate Sue", which was serialized in the New York Times in 2007, this collection showcases the wide range of Kelso's talents in stories ranging from "Cats in Service," a fantasy of a Downtown Abbey-era manor estate being managed by feline servants, to "Korin Voss", a story that went thorugh several permutations before arriving at its present form of a WWII-era historical romance / domestic drama.

All of the stories here are set firmly within the world of men, but remain throughout unapologetically woman-centric, with a firm focus on the defining role played by the experience of motherhood.

The central tale, "The Egg Room", from which the cover image is taken, is a densely layered masterwork that manages to successfully orchestrate its theme and deliver an entire graphic novel's worth of ideas and insights in a mere 24 pages of wistful watercolors.

Get ready to dig in to a thick stack of great comics stories!

This item belongs to the categories: Collections, Gift Catalogue, Graphic Novel
You may also enjoy these related titles:

Queen of the Black Black