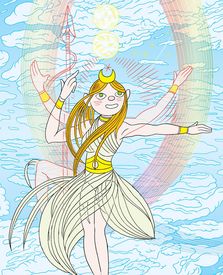 Ron Regé, Jr. strikes again!  What Parsifal Saw collects Regé's work since The Cartoon Utopia.  The two key pieces here are "Cosmogenesis," illustrating the "secret doctrine" of Madame Helena Blavatsky, the key figure in the history of Theosophy (which had a significant influence on the first generation of modernist artists, notably Piet Mondrian and Wassily Kandinsky), and  "Diana," Regé's unique spin on W*nder W*man; both originally appeared in (now out-of-print) self-published micro-editions.  Also included are:  "Pythagoras," which first appeared in The Pitchfork Review (and later in Best American Comics 2015!); Regé's brilliant use of Alex Schubert's Blobby Boys in a scathing critique of contemporary culture and society, all accomplished in a power-packed two-page spread that originally ran on Vice; several one-pagers; a bunch of bonus illustrations; new front and back cover illustrations; and more!  All in a nicely put together and printed softcover volume for quite a reasonable price.  Ron Regé, Jr. has been striving conscientiously to forge a visual language to channel spiritual forces through comics, continuously evolving his approach, and in the process creating a singular and highly rewarding body of work. Recommended!

This item belongs to the categories: Collections, Copacetic Select, Gift Catalogue, Graphic Novel
You may also enjoy these related titles:

The Treasury of Mini Comics