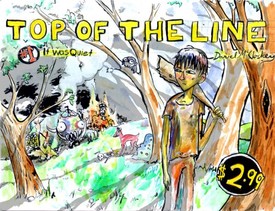 Top of the Line #1
Dan McCloskey
published by Self-published

In his 8-issue series, Top of the Line, now half way completed, writer/artist Dan McCloskey takes a look at our contemporary environment through a science fiction lens that shows readers how the world around us is likely to appear to the evolved perceptual apparatuses that are embedded a few layers down in our consciousness.  The human nervous system, evolved over millions of years in which everything it came into contact with was nature-made and animation (movement) was primarily associated with life (anima, from which animate and animal derive, is Latin for life soul) is as a result hardwired to equate movement with life.  Over the last three centuries an ever increasing number of devices and machines which are in actuality inanimate (i.e, not alive) have been designed and manufactured to behave in ways that not only make them appear to our senses to be animate/alive, but, increasingly of late, aided by sophisticated software, to lead us to interact with them as "living" things.  This tendency has many side-effects, not least of which is a need to parse and often then to repress the urge to reciprocate in kind to the illusory anima, which in turn leads to a host of (mal)adaptive issues.  Top of the Line opens up this phenomenon up for a bit of comics exploration that yields some interesting results.   Other aspects of our world are given alternative encoding in this series as well, such as the gaping divide between the haves and have-nots and the exploitative media that functions to maintain this divide by creating a society of the spectacle that fans of The Hunger Games should be able to appreciate.  But please don't let all this talk of intellectual investigation give you the wrong idea –  most of all, Top of the Line is a rollicking comics adventure of youth in revolt drawn with a vibrant line embodying the exuberance of its creator.  Check it out!