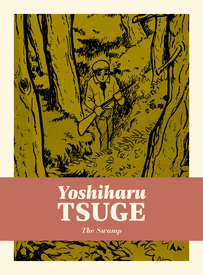 The Swamp collects key pieces from the early years of Tsuge Yoshiharu's career and simultaneously provides an up close and personal look at post-war Japan.  These stories hint at the beginnings of the key themes that would occupy Tsuge throughout his three decade long career, and also show a key stage in the development of the formal approach with which he would capture and present it.  As readers of the perceptive, informative introduction by Mitsuhiro Asakawa will learn, the stories collected in the pages of The Swamp begin with his very first works for Garo, which mark the place where he really came into his own and began forging his unique comics voice.  Best of all, this 256 page hardcover is just the first book in a series collecting, "The Complete Mature Works of Yoshiharu Tsuge" that Drawn and Quarterly will be publishing over the coming years!

Translated from the Japanese by Ryan Holmberg – natch' – who is also serving as co-editor beside series editor, Mitsuhiro Asakawa.

This item belongs to the categories: Collections, International
You may also enjoy these related titles:

The Pits of Hell