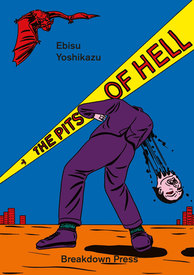 Translated by Ryan Holmberg (of course), including the essays, "Why Is This So Good?" by Minami Shinbo, "About These Comics" by Ebisu himself.  Holmberg also contributed his own essay, "Damn All Gamblers to the Pits of Hell.

We only ust took this one out of the box, so don't have anything to say right now but, "Can't wait to check this out." So we will hand the microphone over to Breakdown Press, who has this to say:

Since his debut in the legendary alt-manga magazine Garo in 1973, Ebisu has been spinning out surreal nightmares that combine the edgiest styles of Tokyo’s artistic counterculture with the absurd and infuriating realities of work and life in the big city. A cult classic upon its publication in 1981, The Pits of Hell offers nine stories that established Ebisu as one of the leading figures of the ugly-but-amazing ‘heta-uma’ movement, the Japanese equivalent of punk and new wave. If you’ve ever wanted to sabotage a lecture about the Mughal Empire, control race boats through telekinesis, or rip your boss’s head off with a crowbar, this is the book for you.

The Pits of Hell was printed by offset lithography at Printon Trükikoda AS in Estonia."