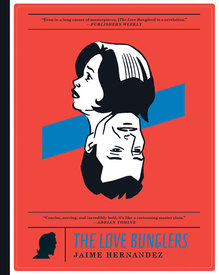 It's hard to know where to begin with a work as remarkable as this.  Originally published in six chapters in Love and Rockets: New Stories 3 & 4  in 2010 and 2011, it includes a flashback chapter titled "Browntown" that, in comic book parlance, could be said to be the – or, at least, a – "Secret Origin of Maggie", as readers are finally made privy to heretofore undisclosed primal scenes at the root of significant swaths of Maggie's personality and character.  While it may be a commonplace to state that character is forged in the crucible of family, it is rare indeed to be given the opportunity of witnessing an incidence of this that has been prepared with such consummate skill that it achieves the degree of verisimilitude achieved in The Love Bunglers, sharing such startling psychological insights in the process.  Naturally, parents predominate in scenarios set within the family arena; their characters are asserted and consequently imprinted upon the children.  This scenario certainly plays out in "Browntown", but intriguingly – and crucially to the understanding of Jaime's world view, working method and sense of character construction – much of what is revealed here – that which is linked to the formation of Maggie's persona – transpired in her absence, to other members of her family.  Here, the unintentional looms large, as revelations of hidden parental acts become keys in the children's hands, used to decode their parents' motivations and values and learn the actual reality undergirding the constructed reality as it had been "given" by the parents.  The drama here simultaneously reveals the quotation marks around "truth" and the effect that this revelation has on all concerned – in one of the great three-panel sequences (establishing - POV - reaction) in the history of comics as one particular revelation is is registered.  There are the corollary experiences of Maggie's brother, Calvin (adding yet another layer to this historically significant name...), which, while primarily serving the self-contained narrative of The Love Bunglers, carry the added charge of immediately registering to long-time Love and Rockets readers as being integral to the development of Maggie's character and personality.  And, finally, the family-is-destiny theme returns with a vengeance in the novel's climax.  Employing the heretofore hidden sequence of events revealed in "Browntown" as the dramatic catalyst, Jaime triggers the release of thirty years worth of potential energy and converts it  into an emotionally devastating catharsis of great power.  Upon reaching the conclusion of The Love Bunglers there is an inescapable feeling of finality and closure to the the saga of the life and times of Maggie Chascarillo.  While it is almost certain that we will be seeing more of Maggie in future issues of Love and Rockets, Jaime's discovery of these hidden pieces of the puzzle of Maggie's persona seems to have allowed him to at last reach the holistic understanding of her character and it's fundamental relationship to Ray as its terminus that he had been striving for these thirty years – and communicate this understanding to his readers in this magisterial work.