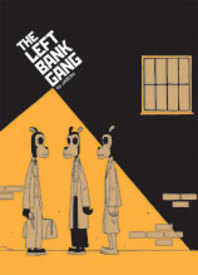 The Left Bank Gang
Jason
published by no publisher listed

This time out, Highly acclaimed Norwegian cartoonist, Jason, mixes his tried and true graphic sensibility in with a little creative reimagining of literary history.  Set in the "Latin Quarter of Paris sometime during the 1920s," The Left Bank Gang follows the lives of Ernest Hemingway, F Scott FItzgerald, James Joyce, Ezra Pound and Gertrude Stein in a reality in which... all were cartoonists rather than writers!  In the grand tradition of cartoonists who follow their muse rather than a paycheck, they are all in desperate straights for cash, and this leads to the primary plot line, at which the title intimates.  This 48-page full color graphic novella is rendered in Jason's trademarked clean, understated and highly engaging style which is full of clever narrative twists.  Enjoyable, as always.

You Can't Get There From Here