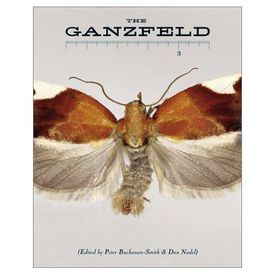 The Ganzfeld is an uncategorizable, one-of-a-kind publication and #3 is, for our money, the crowning achievement of the series.  The editors bring together a wild hodge-podge of material here, yet manage to make it all cohere, forging an uncannily perfect balance of content and creators with this disparate group of artists, writers, designers, illustrators and cartoonists.  The result is a triumph of eclecticism like no other which we unreservedly recommend.

The major highlight of the book, for us, is, by far, Peter Blegvad's cataclysmic contribution:  "Constellations from the Milk Museum," a highly innovative piece that is, literally, a stellar work of genius.  "Constellations"  accomplishes what neuroscientists have been spending billions of dollars on research and technology to achieve:  the mapping of consciousness.  Starting with a random encounter with illuminated milk (you'll understand once you read it) in Truffaut's definitive interview/study of Hitchcock, Blegvad goes on to relate -- in a mere twelve pages, through a unique hybrid form of comics, illustration, montage, charts and maps -- how, in his mind, meaning gradually, and seemingly of its own accord, accreted around this encounter over the subsequent thirty years, and in the process manages the improbable feat of delineating the manner in which information becomes knowledge, which transforms consciousness and, ultimately, creates identity.  Whew!  You simply have to experience this one to understand; but once you have, you will, and things will never be quite the same again.

The Ganzfeld #3 also puts the spotlight on history:  profiles include the inventor of the Macy's Parade Balloons (who also happened to be an amazing illustrator who did the definitive study of 1920s NYC in Up and Down New York); a special 40-page section devoted to the Chicago-based art collective, The Hairy Who, by Dan Nadel; and articles on Bruegel and deep space photography.  It features a unique art/fiction collaboration between Rick Moody and Fred Tomaselli and a new picture story by designer Geoff McFetridge.  Also: a humorous series of black & white drawings which comprise a picture essay on color theory; an illuminated manuscript on where we go when we die; and a short piece on the lost genre of blank books.  AND cool comics by Marc Bell, Ron Regé Jr., Brian Ralph and Blexbolex.  And there's more! (including an essay on the craziness involved in filming Rope -- the first Hollywood feature film to take place in real time -- by none other than its director, Alfred Hitchcock) all bound together and accentuated by impeccable graphic design to form an organic whole that manages to capture some key bits of energy from the "American Century" and slingshot  it over the horizon and into the dawn of the new millennium.

This item belongs to the categories: Copacetic Select, Anthologies
This item is part of the series: The Ganzfeld
You may also enjoy these related titles:

The Book of the Leviathan