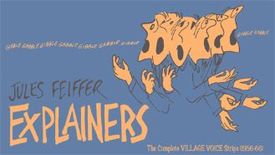 OK, this is the one we've been waiting for.  It all starts here.  Jules Feiffer is the founding father of the alternative newsweekly comic strip.  He walked into the offices of the Village Voice at some point during the first year of its operations and pitched an idea for a continuing comic strip.  The editors took him up on it and for the next forty years Feiffer turned in a strip nearly every week, ALL of which will be collected by Fantagraphics in four fat volumes, each collecting a decade's worth of strips.  This 546 page volume is the first.  Feiffer reinvented the comic strip for the then nascent "Alt." crowd that had The Village as it's ground zero.  These strips seem amazingly contemporary even today.  Try saying that about any other 50 year old comic strip (well, not counting Peanuts, which is, evidently, timeless).  Feiffer created the template, and pretty much owned it for twenty years.  Once the punk rock generation clawed their way into the newsweeklies Feiffer's way became ubiquitous, and cartoonists the likes of Matt Groening, Lynda Barry, Mark Stamaty and Stan Mack spread the gospel.  The comics contained in The Explainers are smart and funny and made a vital contribution to the development of American comics.