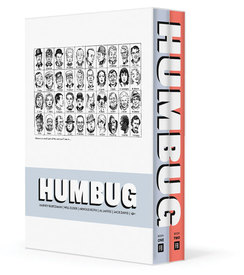 What can we say about a book like this one?  It's all here, the entire run of Humbug, the hidden tributary of so much in contemporary comics.  If there is a hidden link in the overall understanding of the history of the development of the comic book form, this might just be it.  Humbug is the talismanic work that links that links the early pioneer days (1935-1955), The Genesis,  of comic books -- aka The Golden Age -- with the Underground comix scene of the 1960s, The Exodus; that links, in other words, "the greatest generation" with their children, "the baby boomers."  Created by Harvey Kurtzman along with fellow Mad Magazine refugees, Will Elder, Arnold Roth, Al Jaffee and Jack Davis, who were frustrated with the commercial limitations and wanted to strike out and capture the zeitgeist in their own fashion unfettered by the commercial considerations of profit-driven publishers.  And thus, alas, the seeds of its demise were sewn with those of its creation:  it's artistic success predicated upon its commercial failure.  At last, the entire run of 11 issues of Humbug is being reprinted in a deluxe, two-volume slip-cased edition, much of it reproduced from the original art!  This release is a long-awaited landmark comics publishing event.

This item belongs to the categories: Classic Comics Collections, Collections
You may also enjoy these related titles:

EC Classics: Man and Superman and Other Stories

'Taint the Meat... It's the Humanity! and Other Stories

Corpse on the Imjin and Other Stories

The Art of Harvey Kurtzman: The Mad Genius of Comics