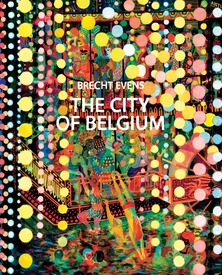 Brecht Evens, creator of The Wrong Place, The Making Of and Panther (all of which except for Panther, which was, thankfully, just reprtinted are currently – and shockingly – out of print here in North America) has, in The City of Belgium, likely produced his masterpiece.  There might not be any other work that compares in the effectiveness of its conveyance of the feeling of being immersed in the overflowing of city life, of the sense of being aware of everything, of being surrounded by so much – too much – that is happening all around at every moment.  A riotous explosion of color and details communicate the overwhelming feelings that accompany this awareness of simultaneity.  The City of Belgium runs for 334 pages of lushly colored, mind boggling art.

And, as for the story:  it is a journey, but more than a journey through space and time, it is a journey through the psyche to the seat of the soul.  Beginning with a single protagonist, heading out for a last night on the town, the story soon branches out to follow a host of others, all whose evenings out on the town intersect at the outset.  Taken together, these characters' lives weave a tapestry that reveals the contours of contemporary Europe for which "the city of Belgium" is – as Brussels is the capital of the European Union – a metonym.  Each of the characters has a distinct and unique character, and here, as elsewhere, character is destiny.  By the time the sun rises, each will have faced – or at least caught a glimpse of – their respective destinies.

We encourage you to dip your toes in with these two previews, but only with the caveat that they barely give you an idea of what's to come.

Here is the preview offered up by Brecht Evens's own site (which we have linked to in the middle).

And, Here is D & Q's preview, which focuses on a single moment.