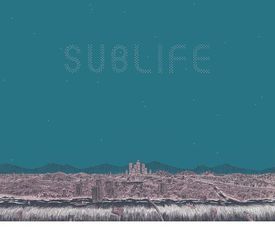 The elusive John Pham has re-emerged at last, with his first solo outing in quite a while.  Years in the making, this first volume of Sublife presents "221 Sycamore St."  While approximately half of these strips -- by our reckoning -- originally appeared in MOME a couple years back, they only now receive their proper context in the contrapuntal arrangement they receive here.  The 64-page piece is structured as an interlinked series of vignettes, each focusing on one of the occupants residing at the titular address, which, taken together, provide a compelling -- if dismal -- portrait of urban life.  As an added bonus, the inside front and back covers provide an episode of "Deep Space," featuring Caption Joe Ho and Commander Dave Wallach, that serves as an ironic bracket for "221."  Pham is a singular talent whose work clearly demonstrates that he is on top of current developments in the art and science of comics. He has produced precious little work, but that which he has produced puts him comfortably in the company of his contemporaries such as Jordan Crane, Sammy Harkham, Paul Hornschemeier, Kevin Huizenga and  Anders Nilson, at the same time as showing ample evidence of his having absorbed lessons to be found in the work of Daniel Clowes and Chris Ware.  Sublife is carefully planned, deliberately composed, beautifully drawn and delicately colored in a palette of teal and peach. Pham has marshaled his energies here to show lives of quiet desperation:  lost, drifting, misinformed, deluded or in denial, the characters that populate this southern Californian address are hounded by a reality over which they have no control, but Pham's artistry makes it clear that they serve as reflections of our own lives in this difficult time.