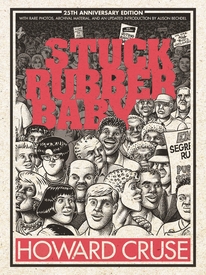 Long – and criminally! – out of print, Howard Cruse's epochal work of long form comics, Stuck Rubber Baby, one of the most significant early North American graphic novels – and among the first to truly merit the label – is at last back in print in this deluxe hardcover edition from First Second that has been released to celebrate the 25th anniversary of its initial publication – an anniversary that Cruse did not get to celebrate himself, having passed away late last year (but he was involved in the preparations for this edition, and so, of course, knew it was coming, thankfully).  This edition includes over 20 pages of bonus materials, much of it written by Cruse himself specifically for this edition, primarily focusing on the process of creating the work.

Here is our original review.

Stuck Rubber Baby is one of the few graphic novels that really and truly succeeds as a novel on the novel’s terms (at the time this review was written, in 2003 - editor's note).  It is an extraordinarily complex and rich tapestry of characters deftly woven into the fabric of a specific time and place:  a mid-sized community in the deep south during the civil rights era.   While this book was originally released in 1995, its recent reprinting makes it appropriate to revisit it at this time.

Somewhat surprisingly, given the nature of his previous work (see Barefootz; Wendel; and others), creator Howard Cruse proves himself with Stuck Rubber Baby to be a singular master of the extended form of comics.  While his art style may be off putting to some -- it’s a somewhat cute and cuddly style rendered with an unusual attention to detail involving a laborious cross-hatching inking technique (imagine Family Circus drawn by Basil Wolverton, or Gasoline Alley pencilled by Charles Burns and inked by Drew Friedman and you’ll begin to get the idea) -- the work here is a breakthrough in quality, and unquestionably represents his career high-water mark, and, indeed, a high-water mark for comics in general.  Cruse employs the story telling capacities of the comics medium to its fullest extent, from the nuances of facial expression and body language to the finer points of page layout and panel composition.  This is a work that can be readily absorbed by a reader with no prior comics reading experience and then studied by a seasoned professional trying to figure out just exactly how that ease in communication was accomplished.

The story unfolds primarily within the community of Clayfield.  Its downtown, bedroom suburbs, and small college on the outskirts, with buses and bridges connecting it all, together serve as a synecdoche for “The South” as it was then known.  As Cruse grew up in Birmingham, Alabama during this period, he knows whereof he speaks and it shows: Clayfield, though entirely fictional, is nevertheless thoroughly believable.  It is the characters, however, that will stick in your mind long after the images of Clayfield have faded.  The inhabitants of the world of Stuck Rubber Baby are far from your typical Southerners, yet they are every bit a product of The South.  These characters while archetypical in many respects are nevertheless highly original and, with the notable exception of the mayor of Clayfield, Sutton Chopper, fairly free from cliché.

The novel is narrated by and centers on Toland Polk, a man who can’t seem to make up his mind.  The entire tale is told from the point of view of the present day (1995) Toland, who appears at the outset, and reappears at critical junctures throughout the novel, which finally closes once again in the present.  The story itself begins with a fragmented look at Toland's childhood, which comes to a dramatic close when  his parents die suddenly in a car crash caused by a drunk driver.  While he seems to authentically mourn their loss, he does not appear to be traumatized by it.  He is shown to be close to his older sister, Melanie, who marries a fairly typical conservative and religious southern man, Orley, shortly after their parents death.  Following this brief introduction, the story shifts to the time frame within which it stays for the remainder of the novel.  His closest friends at that time are Riley Wheeler and his girl, Mavis, who together form a modern, liberal couple that is just shy of being too-good-to-be-true.  After Riley returns from his stint in the armed forces, Toland moves in with them.  But, before this happens, he meets Sammy Noone, fresh out of the Navy, and Ginger Raines, a free-thinking coed from Ohio, who come to represent the two poles of Toland’s vacillating psyche.

Around this core is an immense supporting cast that, despite its size, consists of surprisingly well delineated and truly memorable characters.  Characters that, while they are supportive to the narrative of Stuck Rubber Baby, are stand-ins for those individuals who were, in actuality, the leaders and prime movers of change during the civil rights era.  The Reverend Harland Pepper, his wife, the former jazz chanteuse, Anna Dellyne, and their son, Les; freedom singer, Shiloh Reed; Civil Rights agitator Sledge Rankin; nightclub proprietors Marge and Effie, and Effie’s piano playing sister Mabel; nightclub performer, Esmo; the list goes on.  The overall cast is fairly evenly divided between black and white, gay and straight, but all are united in their opposition to the oppressive and racist regime of “The South” that is embodied by Mayor Chopper, local rag, The Dixie Patriot, and the Ku Klux Klan.

The central thread of the novel’s narrative is Toland’s quest for an identity.  The single most outstanding aspect of Stuck Rubber Baby is the honesty with which Cruse portrays Toland’s painful personal failures that occur as he struggles to discover who he is.  Time and again, Toland is revealed as immature, as selfish and lacking in empathy, as unable to break out of his narcissistic solipsism; yet never does he submit to despair.  It is worth noting at this point that the one thing that stands out about Toland is that he is profoundly not a hero.  This is worth noting because of the equally profound association of the comic book form -- of which the graphic novel is a fairly recent outgrowth -- with precisely that: the hero.  Interestingly, Toland Polk's character is not at all dissimilar to that of many a superhero's "secret identity."  It is simply lacking the superhero component.  In other words:  imagine Peter Parker's life if he weren't Spider-Man, Bruce Wayne's if he weren't Batman, Clark Kent's if he weren't Superman.

Neither does Cruse shy away from presenting the negative consequences of Toland’s personal failings on those around him.  While a superhero can use his powers to save the day, Toland doesn't have that option.  In employing the narrative strategy of setting Toland's individual struggle for his own personal and sexual identity side by side with the civil rights struggle -- a struggle that clearly involves heroism in the face of life-threatening danger -- Cruse contrasts Toland's sometimes trivial tribulations to the great sufferings of the African-Americans among whom he lives, and explicitly links these sufferings to the sufferings of the gay community in their struggle for the same rights; and by doing so Cruse simultaneously ennobles Toland's individual struggle by demonstrating the existence of ample common ground between it and the greater struggle amidst which it takes place.  Despite Toland’s numerous flaws and repeated failures, Cruse never loses his deep empathy for him, and as a result neither does the reader.  In presenting the human cost, both on himself and on those around him, of Toland’s personal quest to find an identity he can live with and in continuing to believe in it despite this cost, Howard Cruse has forged a powerful endorsement of the inherent and immutable value of the individual -- of all individuals, black and white, gay and straight, strong and weak, you and me.

If you're still on the fence, please take a moment to read Alison Bechdel's heartfelt introduction to the book, which is available in its entirety on Slate, here.  If not, then just wait for your copy to arrive to read it in the more intimate setting of the book itself, as it is best experienced.

And, anyone who has not done so already, is hereby directed to Howard's obituary, penned by Justin Hall, at TCJ.com.

The Other Sides of Howard Cruse