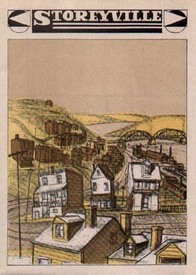 Much to our amazement, a heretofore unknown secret stash of the original 1995 newspaper edition of Storeyville has been unearthed!  Each copy had been sealed in a polypropylene bag and the entire box had been taped up and stored away in a corner where it was eventually forgotten... until now!  We haven't seen a copy of this for sale anywhere for years (except for one that was on sale on Amazon a while back for $1000.00!)  so, if this is something you've been thinking about, don't debate about it too long, as there's only this one box, and when it's empty, that's it!  The box is diminishing as we write, and now's there's also this to consider:

NEWSFLASH:  "Hey Copacetic Customers! - Frank Santoro here. If you are a fan of my work, you may have heard about the newspaper comic that I made for the 2011 Pittsburgh Biennial titled Blast Furnace Funnies.  Commissioned by the Carnegie Museum of Art, this comic was available free to the public during the Biennial and unavailable anywhere else – until now! That's right:  every Copacetic customer who buys a newsprint edition of Storeyville will receive a free copy of Blast Furnace Funnies.  After Storeyville, this is probably the best comic I've ever done. I made my parents cry with this one, folks. A heartfelt postcard to my home town - this comic is something I've been trying to do for years - I know you'll love it. Get it FREE with every purchase of the newsprint edition of Storeyville. Over and out."

A perfect match of form and content, Storeyville is a 40 page tabloid newspaper -- printed in black and white and a set of muted tones ranging from sandy yellow to a deep sepia -- that describes the arc of a youthful adventure that takes its protagonist from Pittsburgh, Pennsylvania in the USA to Montreal, Quebec in Canada at the opening of the 20th century.

This sprawling mis-en-scene gives Santoro ample opportunity to showcase his love of drawing: cityscapes, landscapes & seascapes, rendered in a unique combination of pencils, inks and grey-scale markers, beautifully contain this drama.  The narrative concerns the tried-and-true rite of passage story of a young man in search of his future self, but this is probably the only aspect of the work that can be considered as being “traditional.”

Executed in 570 uniformly square panels arranged in a gutterless 3 x 5 grid over 38 pages, Storeyville works to develop a compromise between the requisite third-person omniscient of standard comic book narratives with the first-person singular of contemporary autobiographical comics.  The genius of Storeyville is that the first-person extends beyond the voice of the narrator to the execution of the art itself. The mood and mind set of the narrator are revealed as much, if not more so, by the various styles of rendering and degrees of detail in the drawing through which the action of the story is displayed as with the textual voice employed by the narrator in relaying it.  In other words the voice of the protagonist as well as that of the author is embedded in the art as much as it is in the text.  To clarify: obviously this conveyance of narrative voice through artistic style is one of the central components of the Comics form, and has been key to Comics’ appeal throughout its history.  What is novel in Storeyville is the degree to which Santoro’s deliberate modulation of the style, methods, and media of the illustrations to match the mode and state of the narrator’s voice in relaying the narrative is in and of itself responsible for communicating the experience of the protagonists.

The narrative itself while clearly the product of a romantic imagination nevertheless manages to steer clear of cliché and brings to the page a vision of its subject that comes alive to the reader.  The central protagonist and narrator is Will, a young man stuck in the Pittsburgh of way-back-when and rarin’ to go, but not sure where to until he learns that his former mentor/partner/best-friend, the Reverend Rudy, has been sighted in Montreal, and then he’s off!  It is during the course of his quest -- which includes obligatory yet visually elegant explanatory flashbacks -- and finally in its completion that Will comes to terms with himself and his fate.

Storeyville is a rare one-of-a-kind treat that anyone who is at all passionate about comics is sure to not only enjoy reading, but also to come away from the experience with a deeper appreciation of what the medium of Comics is capable.

Storeyville  has been out of print for quite some time and had a limited print run most of which was subsequently destroyed.  In other words, you probably won’t find it at your friendly neighborhood comics store -- unless, of course, you happen to live in Pittsburgh, PA.

You can, of course, now also buy Storeyville in the archival hardcover edition from PictureBox, HERE.

________
P.S. -- The title Storeyville was deliberately spelled Storeyville instead of Storyville for a reason.

This item belongs to the categories: Graphic Novel, Small Press Comics, Copacetic Select
You may also enjoy these related titles: