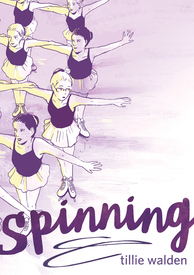 Tillie Walden's long in the works and hotly anticipated coming of age story has arrived.  In the pages of Spinning, Tillie Walden provides a first person window into the world of competitive figure skating. One of the western world's many subcultures, figure skating is like the proverbial iceberg which is carried along by the ocean of the dominant culture: all that most of us see is the tippy top that appears on television during national and international competitions, while 9/10 is submerged and hidden from site to all but those directly involved – until now.  It is a world populated largely by girls.  Many of whom, as revealed here, enter it at the same time as kindergarten.  And in which it takes discipline and focus to survive and a strong, almost instinctual competitive drive in order to get ahead and work through the ranks.  These are not qualities that are commonly associated with the population group to which they adhere in this milieu – until now.  As with other tightly focused and disciplined groups, a sense of family emerges.  It is often an unfulfilled emotional need that provides the impetus towards submerging one's identity in the group, and the strength of this impetus is generally directly proportional to the degree to which this need is unmet elsewhere.  This is hinted at here in Ms. Walden's depiction of her relationship with her mother.  There is more to the story, of course, as during the course of its 400 pages it is revealed that there are other needs that the world of ice skating cannot meet.  The complex drama employs metaphors of skating forms to organize its narrative and a connection between these skating forms and those of comics is tentatively suggested.  Ultimately, the self portrait created in these pages goes a long way towards providing the comics community with an understanding of how Tillie Walden developed such a startling level of productivity at such a high level of sophistication and artistic achievement so young and so quickly bloomed into a major talent upon exiting the world of skating and entering The Center for Cartoon Studies.

This listing is the hardcover edition.  Also available in softcover, here.

I Love This Part