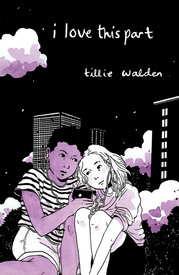 I Love This Part
Tillie Walden
published by Avery Hill

An early 21st century high school romance told in a neoclassical early 19th century comics language, I Love This Part is composed of a series of 64 one-page tableaus through which the protagonists move – almost float – and in which the figures occupy masses and spaces within each of the many land and cityscapes which wildly vary in relation to the presupposed respective spatial relationships they occupy in our memory maps of reality - but perhaps not, Ms. Walden hints here - in our imaginations (Ms. Walden is likely taking her cue here from Winsor McCay, as she did in other ways in her first Avery Hill work, The End of Summer, and by so doing reinvigorating the century old tradition of this artist who did so much to shape the history of comics, returning to the source to renew the form).  Most readers of this effecting work will, of course, be too engrossed by the detailed delineations of affections exchanged and the consequential quandaries that follow to be paying much attention to the formal qualities outlined above.  It's a winning combination, either way.