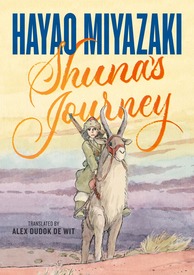 In 1980, after the not-so-great box office performance of his directorial debut, Lupin the 3rd: The Castle of Cagliostro, Miyazaki set his sites on manga and began work on Shuna's Journey in tandem with the orignal manga for Nausicaä.  Nausicaä was published in serial form, in Animage magazine, beginning in 1982. Shuna's Journey, on the other hand, went straight to book publication, in a single volume, in 1983.  While Nausicaä soon thereafter entered into production as an animated film – which, of course, as all Miyazaki fans know, went on to be a huge international success, ultimately leading to the founding of Studio Ghibli – which then led, in turn, to the manga to be among the first translated into English and published in North America, by Viz, beginning in 1988, it is only now – close to forty years after its original Japanese publication – that Shuna's Journey at last arrives on our shores in an English translation by Alex Dudok De Wit, in this full color, hardcover edition.

Based on the Tibetan folk tale, The Prince Who Turned into a Dog, the visuals have much in common with Nausicaä – unsurprisingly, given that he worked on both simultaneously.  But there's much that is intriguing and unique to Shuna's Journey, and, of course, there is the page after page of wonderful Miyazaki art and story.