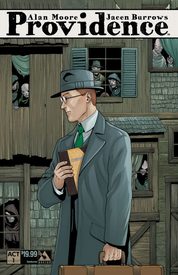 Anyone who discovered this series too late to grab the early original issues need no longer fret as this hardcover volume collects the first four issues – for the same price you would have paid for the comics.  Providence is one of Alan Moore's (and Jacen Burrows's) most intriguing and engrossing works. It's a complex riff on the life and works of H.P. Lovecraft which effects a slow, very (very) gradual reveal of the the forces at work just out of sight of those who don't know how –or where – to look.  The series shows readers one version of the events that are transpiring on the page, while also relaying what the protagonist makes of them, through his diary entries that appear as addendum in each issue.  This tension between versions is the signature accomplishment of this series, which – like Watchmen, with which it also has other things in common – runs 12 issues, and so will, presumably, continue in Act 2 and conclude in Act 3.

The From Hell Companion