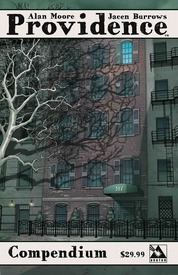 Providence is an ambitious work of meta-fiction that has much in common with Moore’s most celebrated work, Watchmen, most obviously with it’s format as a 12-issue limited series, but most importantly with its similar claim to being a comics masterpiece.  But while the "meta" of Watchmen pertained to superheroes, the "meta" of Providence pertains to horror; specifically the horror of H.P. Lovecraft.  Now, finally, after a multi-year hiatus, the entire series, which originally appeared between 2015 and 2017, is at last collected in an affordable single-volume here in this 480 page softcover compendium.  Taking its title from H.P. Lovecraft’s hometown of Providence, RI, Moore clearly intends this epic of meta-horror to be read – in part – as a meditation on Lovecraft’s Cthulu mythos – as well as his life, times and world view.  Providence is like Watchmen too in that Moore lets it be known at the outset that it takes place elsewhere in the multiverse, in a world that is closely parallel to our own, similar in most respects, but yet not the same; perhaps most profitably seen as our world as Lovecraft saw it.  And, finally, the methodically detailed artwork of Jacen Burrows provides a similarly well-suited complement to Moore’s script for Providence as that of Dave Gibbons did for Watchmen.

The story’s protagonist is Robert Black, a gay, self-involved writer living in New York City, and opens in 1919.  The story runs on two, parallel tracks – that of the visual mise-en-scène of the comics, and that of the prose recording of the same events in Black’s personal journal, which appear at the conclusion of each issue/chapter.  It is in the parallax view of the variance between these two accounts that the true story – and horror – lies. This double track narrative probes the nature of subjective experience, in the process providing a demonstration of the the powers of self-deception and delusion and ultimately working to flip the relationship between fiction and non-fiction, with Moore positing that it is fiction that is closer to the ultimate truth as unconscious biases and innate ignorances cannot help but distort any reality that is processed by an individual subjectivity, and thus that the "objectivity" of reportage is illusory.  In this way, Providence can be seen as providing a Philip-K-Dickian take on the Cthulu mythos.  The narrative builds relentlessly towards a suitably cataclysmic conclusion, but as in Watchmen, the greatest and most memorable moments occur along the way.

And, Providence could well prove to be Alan Moore’s final major comics work, as he recently signed a contract for a five-volume series of (prose) fantasy novels (he also announced his “retirement” from comics; but we’ve heard that before).  If so, it will be a fitting work to mark his transition as one of its signal accomplishments is in employing comics and prose together in an effective and original synthesis.  Yet it also clearly shows what the world will be losing by Moore’s departure from comics, as it is a work that would not be possible to create in prose alone.

The From Hell Companion