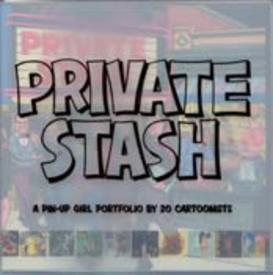 This one is an attempt to be the last word in fetish object.  Playing on the trope of arrested adolescent sexuality stereotypically identified with the bagging-and-boarding fanboy set of which more than a few of these participants are graduates, Private Stash starts out with a squarebound translucent case that contains -- once you've struggled to remove it from this secure enclosure without damaging it -- a clever two-layer illustrated wraparound slipcase portrait of all twenty contributors by Rick Altergott (displaying his Mort Drucker and Wally Wood chops to full effect) which opens to reveal a 20 panel accordian-print that opens (to over ten feet!) to reveal the wet-dream girls of a fairly astounding array of talent:  R. Crumb, Dan Clowes, Gilbert and Jaime Hernandez, Charles Burns, Gary Panter, Peter Bagge, Adrian Tomine, Kim Deitch, Tony Millionaire, Richard Sala, Ivan Brunetti, Ron Regé,Jr., Dan Zettwoch, Rick Altergott, Jonathan Bennett, Sammy Harkham, Tim Hensley, Mitch O'Connell and Archer Prewitt (It's too bad they couldn't get Chris Ware on board with this one, but then again, his fantasy might be too much for the rest of us to handle...).