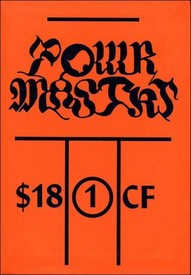 It all starts here! It's appropriate to follow New Engineering with Powr Mastrs* (and not only because both are published by PictureBox) as C.F. is, like Yokoyama, very much engaged in challenging the standard representations of time and space in contemporary comics.  There is, notably, quite a bit more story -- as well as humanity -- in C.F.'s work, however.  What people are doing, where they are going, how they are making their way and when they are going to get together all figure prominently in Powr Mastrs, if in an oblique way.  There is a real organic quality to the work here, a quality which is enhanced by the work being rendered wholly in pencil with no attempts made to add any effects of any sort.  C.F. has produced quite a few small print run, self-published comics (as well as appearing in numerous anthologies, including this year's America's Best -- see below) and has long had a cult following among what has come to be know as the "Fort Thunder crowd."  Now, with the release of Powr Mastrs, everyone has a chance to see what all the fuss is about.  We think quite a few comics readers are in for a pleasant surprise.  120 pages; embossed flexi-cover.

*(As it did when this review originally appeared).

This item belongs to the categories: Graphic Novel
This item is part of the series: Powr Mastrs
Search Copacetic
Just in:
See all recent arrivals...
Copacetica
Edifiying essays about all things Copacetic