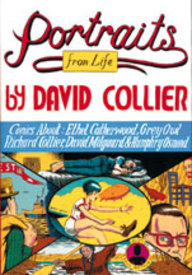 This book presents the strongest of David Collier's work and is one of our perennial best-sellers here at Copacetic.  It is filled with extremely engaging stories of the lives of minor, obscure and offbeat Canadian figures.  Some of these are full fledged biographies, such as the fascinating account of Humphrey Osmond, the Canadian scientist who was an early researcher into psychotropic drugs and reputedly coined the term "psychedelic."  Then there's the life story of Ethel Catherwood, the Olympic high jumper known as the Saskatchewan Lily, who ended up obscure and reclusive.  A more tightly focused tale is that of "Grey Owl," an enigmatic British man who managed to convince those he came into contact with in the Canadian north that he was a North American Indian.  The acme of the collection is the tale of David Midgaard, a Saskatchewan man arrested as a teenager and imprisoned for decades for a rape and murder he didn't commit.  This is a gripping tale told in the inimitable Collier fashion, wherein he weaves his own life into the tale of another, and so really makes it hit home hard.  The stories in this volume were key to pioneering the comics journalism movement.  They amply illustrate why the most notable of the new comics journalists, Joe Sacco once said, "I don't think there's a cartoonist whose every new work I approach with such anticipation as David Collier."  RECOMMENDED!

Now out of print.  We are currently offering "best available copies" that we have sourced.  All copies will be in at least very good condition with only minor flaws like small creases, edge or corner wear; perhaps a small minor stain.  Some copies will be close to new.  It's the luck of the draw!  We will always provide the best available copy.

Mini kuš! #95 – Before the Pandemic There Was a Touch Football Tourney